Christmas in the Shadow of the Tree 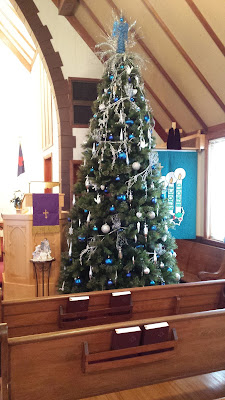 “I will put enmity between you and the woman, and between your seed and her Seed; He shall crush your head, and you shall bruise His heel” (Genesis 3:15).
Grace and peace to you from God our Father and the Lord Jesus Christ!
It is fitting, I suppose, that we speak tonight from the shadow of a tree. It is Christmas Eve, after all, and we Lutherans love our Christmas trees. In fact, it was a Lutheran pastor, Rev. H. C. Schwann, who is credited with putting up the first Christmas tree in an American church in 1851. What a beautiful tree we have here! Bright white lights! Shiny silver and royal blue ornaments! A dazzling star! But the fruit on this tree, though a delight to the eye, is obviously not good for food, nor does it promise to make one wise, like the forbidden fruit of the tree in Eden.
The Lord spoke the words of our text from the shadow of that tree on one of the worst days ever—the day that Adam and Eve fell into sin. God had created the man and the woman and placed them in Paradise so that they might live with Him forever. He’d given them dominion over all creation, only withholding from them one thing—the fruit from the tree of the knowledge of good and evil. But tempted by the serpent, Eve ate the forbidden fruit while Adam stood by and said nothing, and then even participated in the sin himself. Sin came into the world, and death through sin. The days of creation were suddenly numbered. 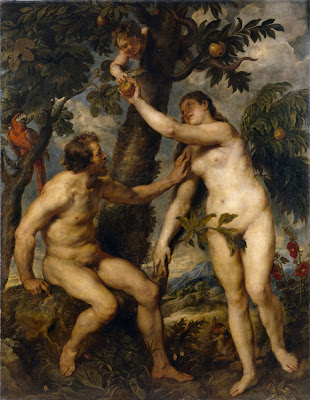 The consequences of the Fall would be many and horrendous, and the Lord was about to tell Adam and Eve what would happen. But first, even before He spoke of the pain and strife and death which was to follow, He spoke to give them hope—a silver lining of promise in the dark cloud of judgment. To the serpent, He said: “I will put enmity between you and the woman, and between your seed and her seed; He shall crush your head, and you shall bruise His heel.”
Enmity… an enemy of Satan was coming; and while the devil would manage to bruise his opponent’s heel, his opponent would crush the devil’s head. Who would this be? The Lord declared it would be the Seed of the woman, a strange phrase indeed, because women don’t have seed; men do. It was as if this devil’s enemy would be born of a woman alone, without her having known a man. Behold the great mercy of God on sinful man. Even before the Lord described the consequences of sin to Adam and Eve, He first promised that a Savior was coming. He’d be born of a woman; and while the devil would hurt Him for a time, He would destroy the devil and his power once for all.
While the Lord spoke to give Adam and Eve hope, His words gave no comfort to Satan at all. You see, the Lord didn’t specify which child born to which woman would be the Savior. So for thousands of years, each time a child was born, the devil would have to wonder if this would be the one who would crush him. For even Satan knows that God keeps His Word.
And so, in the course of time, God kept His promise. In the backwoods town of Nazareth, the angel appeared to Mary and spoke the Word of God; and Jesus was conceived by the Holy Spirit so that He might be born of the Virgin Mary in the little town of Bethlehem. The Savior was now become flesh, and from the moment He took the form of a single cell in Mary’s womb, His flesh and blood had one destination—a tree on a hill called Calvary.
Thus, our Christmas Eve finds us in the shadow of one more tree. A leafless tree, with only one fruit hanging from its branches, the fruit of Mary’s womb, the God-man Jesus Christ. Behold your Savior on the cross! It’s not as pretty as the Christmas tree, is it? It’s not as cute and cuddly as a baby wrapped in swaddling clothes and lying in a manger. But it’s oh-so-important to your salvation. For this is where the Lord keeps the rest of His promise to save His people from their sin. Here, the Seed of the woman crushes the serpent’s head. 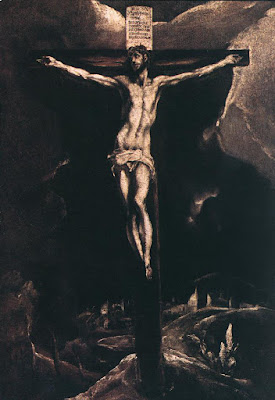 From the story of Christ’s passion, you can visualize the physical suffering, at least as much of the wounds and the blood and the cruelty as your mind will permit you to imagine. By faith, you also believe what you cannot comprehend: not only does Jesus suffer physically on the cross, but He also suffers God’s judgment and hell for the sins of all the world. In other words, while the physical suffering is horrendous, it is only a small bit of the suffering that the Lord truly undergoes. You cannot comprehend the full, eternal agony that Jesus suffers on that cross as He bears God’s righteous wrath for each sin of every sinner.
And yet, you rejoice in this: while the suffering of the Lord Jesus Christ is infinitely unimaginable on the cross, for Him it is only the bruising of His heel. The Lord keeps that promise, too. Even as Jesus hangs on Calvary’s tree in God’s Judgment, He remains the Son of God who will be delivered from this condemnation. The Lord keeps His promise as Jesus suffers on that cross—for three days later, He is risen from the dead. The devil is thoroughly crushed.
That’s not to say that say that he won’t try to take you with him. Even as Satan struggles in the final throes of death, he will draw upon one of his various schemes and lies from his bag of tricks to trip you up, too. Given the chance, the evil one would use your sins against you in order to accuse you: “Do you see what you have done? Surely God has no love or mercy for the likes of you, and you can’t atone for your guilt.” But this lie is crushed at Calvary. Your Savior declares, “I see what you have done. But you, look at the cross and hear that there I have suffered for all of your sins, paid the price for them all. You can’t atone for your guilt, but I have. And no matter the devil’s accusations, I say you are forgiven.”
The evil one would also use death and grave to haunt you: “What hope do you have as a Christian? You grow sick and weary; you lose friends and loved ones; and eventually, you also will die and go to the grave. What advantage do you have being a Christian? Forsake this Savior, for you are still going to die.”
This weapon, too, is destroyed at Calvary. The Lord declares, “Until I return, it is given to you to rest in the grave; but look to the cross and hear this Word. I have already gone to the grave, and I have come back out. I am the death of death because the grave could not hold Me. And as I have been raised from the dead, so also I will raise you, My people, from death and grave to everlasting life.”
The devil will whisper that he still has the upper hand; sure, Jesus scored some points on the cross, but the evil one still has the power to snatch you into hell forever. But his power is destroyed at Calvary. The Lord declares, “I have paid the price and broken out of the tomb. Furthermore, I have descended into hell to declare My victory. The gates of hell could not keep Me out, nor could they keep Me there. I have conquered hell for you, and I will raise you up to heaven.”
The promise made long ago has been fulfilled for you. The Seed of the woman was born in Bethlehem in order to be the Sacrifice for your sin. He went to the cross and crushed Satan’s head, robbing him of every possible weapon by which he might snatch you away. One day soon, He will return to bring you home with Him. There, in Paradise, you will eat of the tree of life, that yields its fruit continuously, Christ Jesus Himself.
Joy to the world! The Lord has come—for you. The Savior has died—for you. Jesus is risen—for you. You are forgiven for all of your sins.


In the name of the Father and of the Son and of the Holy Spirit. Amen.
Christmas Genesis 3 Luke 2 Nativity Paradise Tree